Attitudes of and toward Negroes

78
78
Use the space below to write any other comments you have about any part of this questionnaire. 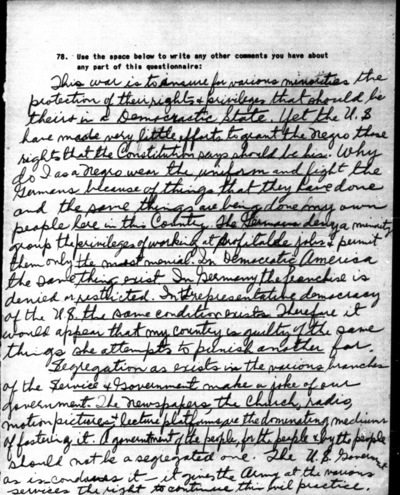 This war is to insure for various minorities the protection of their rights + privileges that should be theirs in a Democratic State. Yet the U.S have made very little efforts to grant the Negro those rights that the Constitution says should be his. Why do I as a Negro wear the uniform and fight the Germans because of things that they have done and the same things are being done my own people here in this Country. The Germans deny a minority group the privileges of working at profitable jobs + permit them only the most menial. In Democratic America the same thing exist. In Germany the franchise is denied or restricted. Inrepresentative democracy of the U.S. the same condition exists. Therefore it would appear that my country is guilty of the same things she attempts to punish another for.

Segregation as exists in the various branches of the Service + Government make a joke of our government. The Newspapers, the Church, radio, motion pictures + lecture platforms are the dominating mediums of fostering it. A government of the people, for the people + by the people should not be a segregated one. The U.S. Government as is condones it - it gives the Army at the various services the right to continue this evil practice.