What the Soldier Thinks

The findings of the Research Branch's soldier surveys were initially restricted. The client, or “customer,” was the organization’s leadership. Reports were submitted to the officers and War Department agencies that requested a survey, and as a courtesy to the commanders of posts where they were administered. Memoranda and reports were also distributed to War Department offices and officers when the results touched upon issues related to their command, remit, or mission. Federal agencies and the White House were recipients as well. Additionally, the Research Branch distributed reports to others in leadership as potential clients for its services.

Near the end of 1942, the Research Branch produced a digest of all the studies conducted that year called What the Soldier Thinks for a conference of high-ranking officers. This first issue of What the Soldier Thinks was well-received, circulating throughout the General Staff and beyond, although eight months would elapse before another was produced.

“I have just examined with great interest your second edition of ‘What the Soldier Thinks’ and I want to congratulate you on it. It seems to me you are amply demonstrating the great worth of public opinion research on a scale and for a purpose which we old practitioners have had little chance to do. I think your job is a meritorious one, and everyone connected with it should feel justly proud.

I am disappointed not to find more to criticize.”

Believing communication essential in a democratic army, chief of staff George C. Marshall issued a September 1943 directive that What the Soldier Thinks be published monthly and circulated throughout the organization, and not just among army brass (WDCSA 330.14, 3 Sept 43). Morale was faltering at the time, in the infantry in particular. Marshall trusted that information and data, plainly conveyed, would educate and then motivate. He reckoned this not only of foot soldiers but also of commanders and staff, pointing them to the results of surveys to support his directives. Highlights from tens of studies appeared as well in the Army Service Forces' Monthly Progress Report.

The first issue of What the Soldier Thinks, as a monthly digest aimed at field and line officers, was published in December 1943, with a print run of 16,000 copies. Distribution, however, was uneven, not reaching below the battalion level; was frequently delayed; and was deemed a failure in Europe. A supporter of the Research Branch, Army Service Forces Commanding General Brehon B. Somervell intervened and issued a directive in April 1944 that every company or its equivalent should receive at least one copy. Shortfalls in distribution and difficulties with clearance persisted. Still, print runs that summer started to top 100,000.

“General Peterson, the Inspector General, told me on the way back from the Leonard Wood Conference that he considered ‘What the Soldier Thinks’ the most valuable current paper gotten out by the War Department; that he had all his staff officers study it and always made inquiries on his inspection trips to see that it was properly used for the training of officers.”

As the nation started to prepare for the end of the conflict, public demand for reliable data pertaining to soldiers and their readjustment as veterans intensified. A series of reports was released unclassified to the public and press, leading to requests from libraries, local planning committees, government agencies, educational institutions, corporations, publishers, and other concerned individuals and entities. A special What the Soldier Thinks “Post-War Plans of the Soldier” edition was published and given wide circulation to meet the demand. 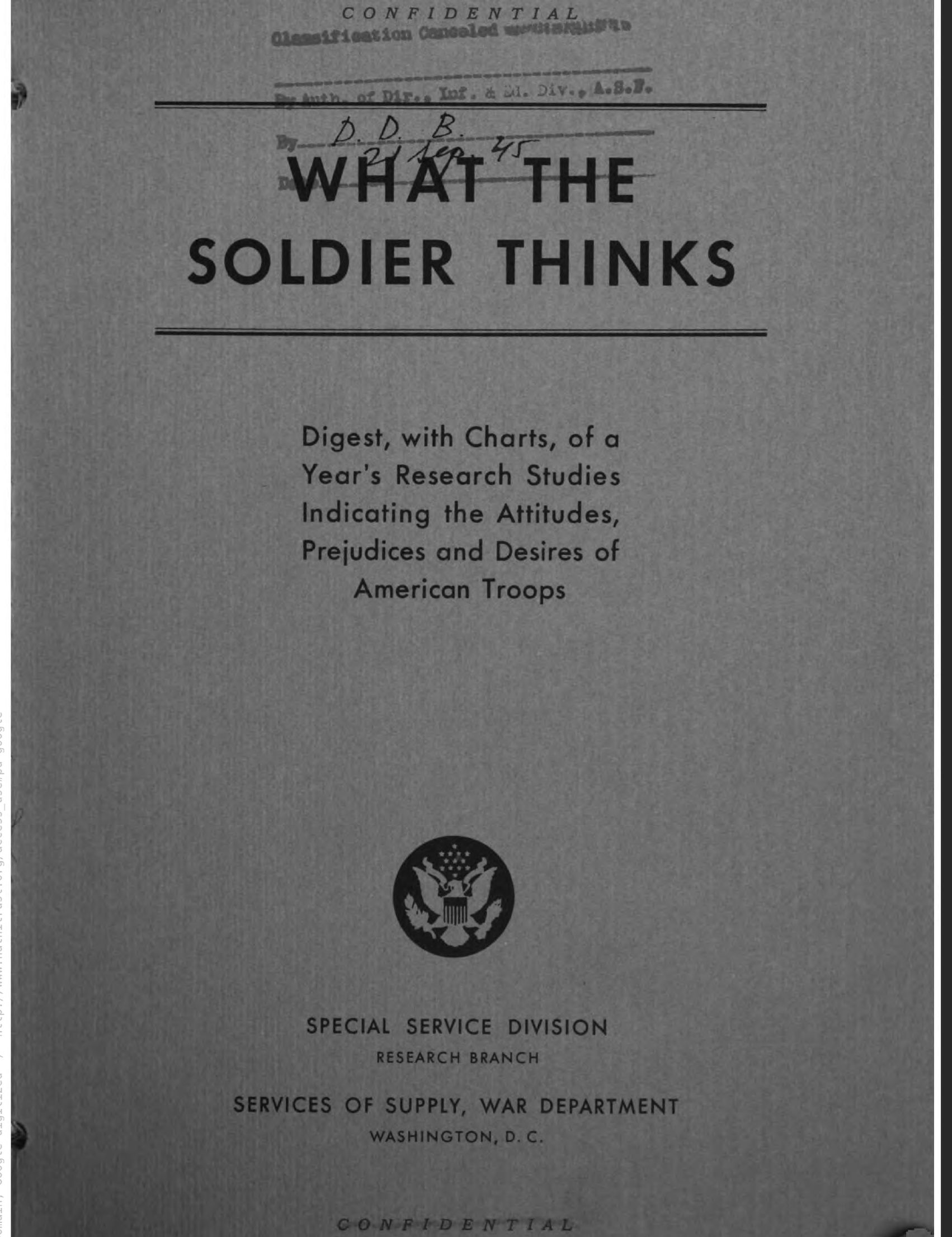 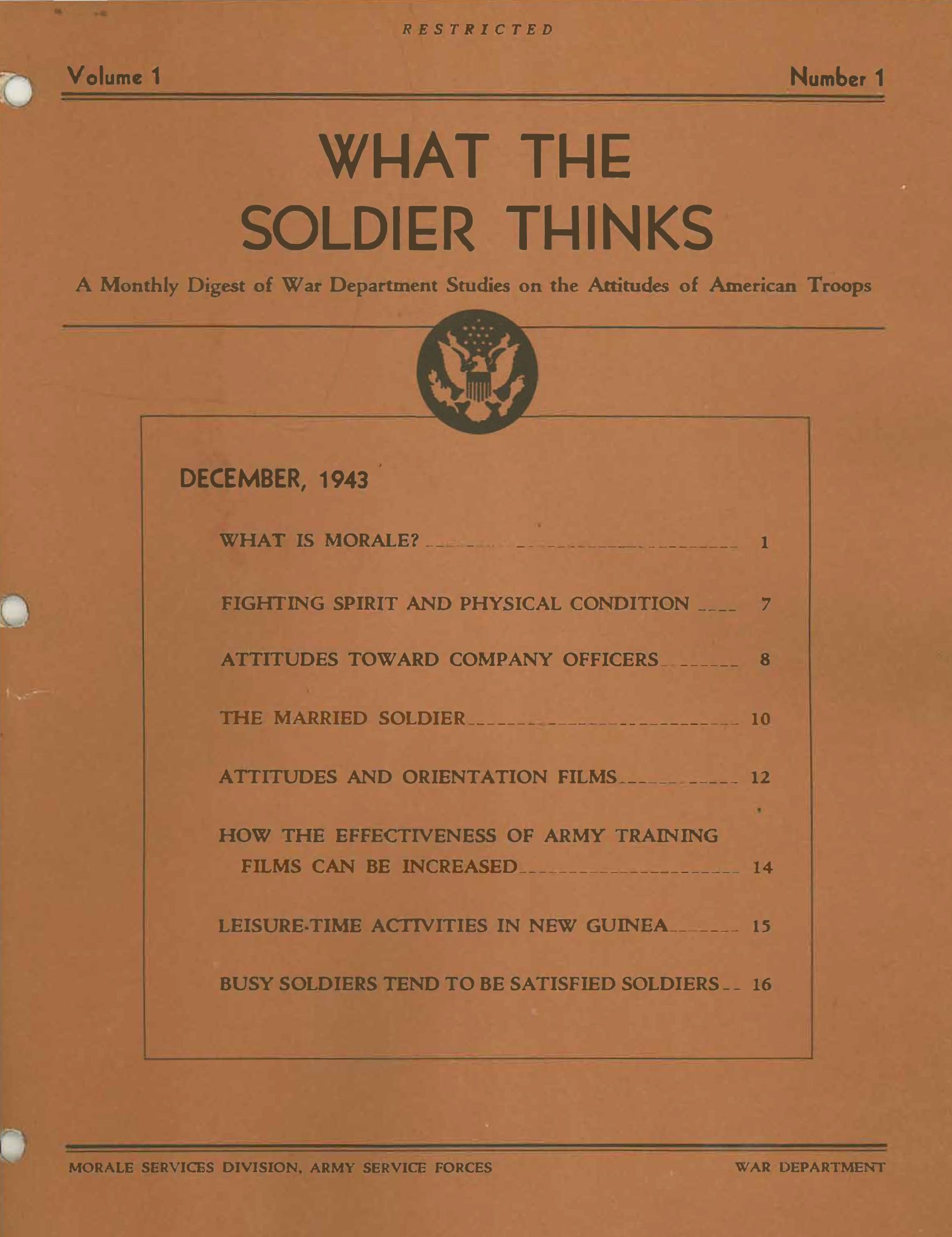 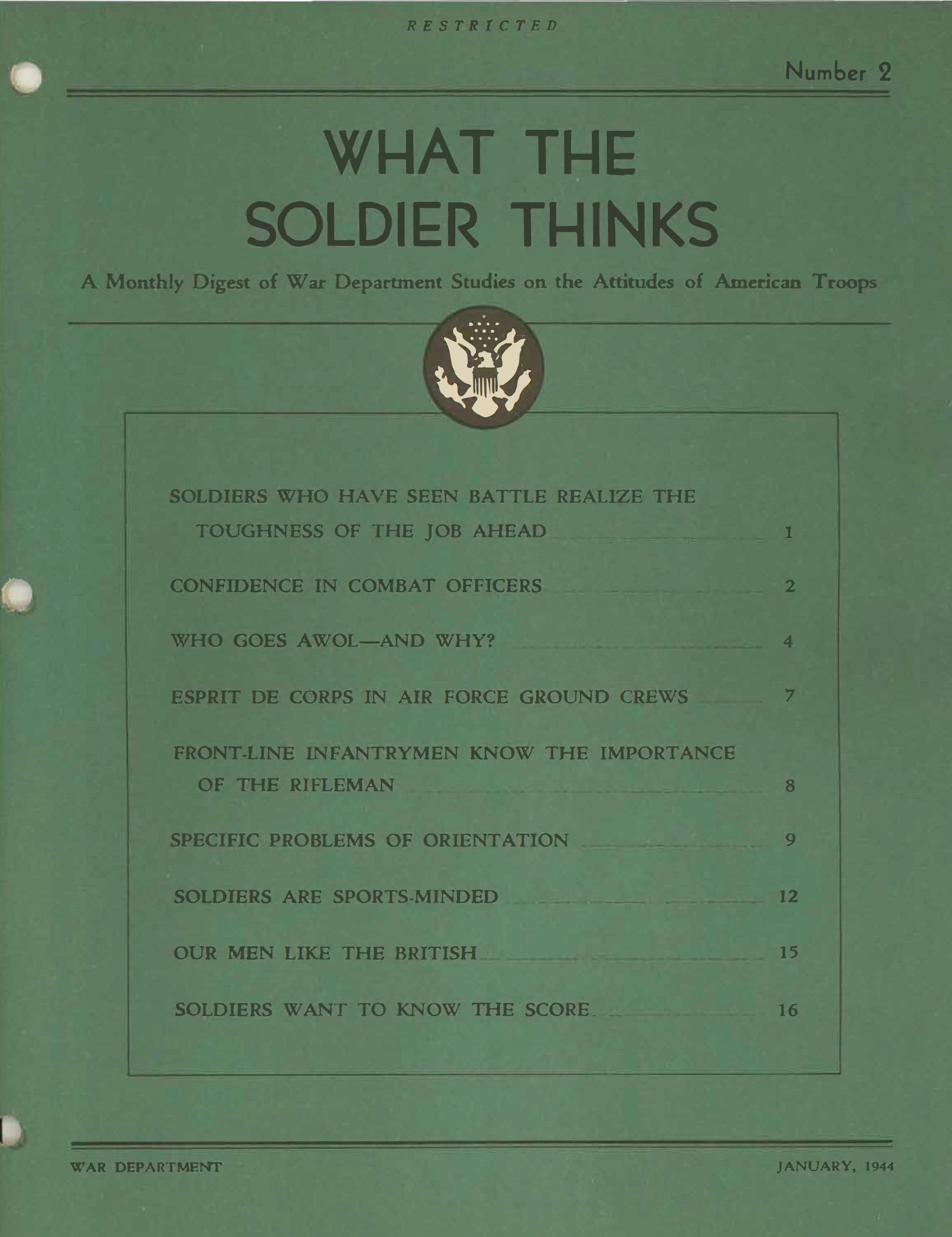 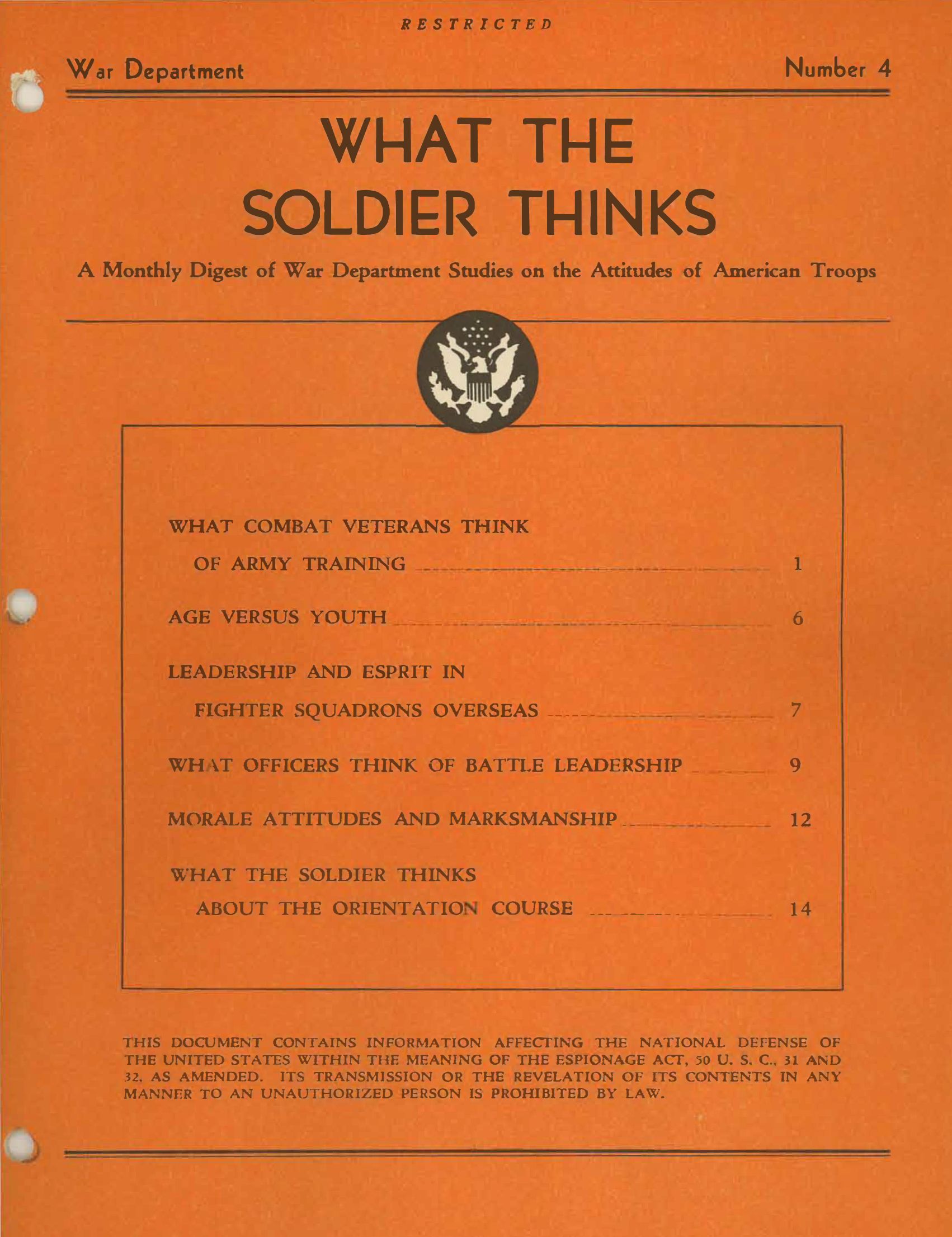 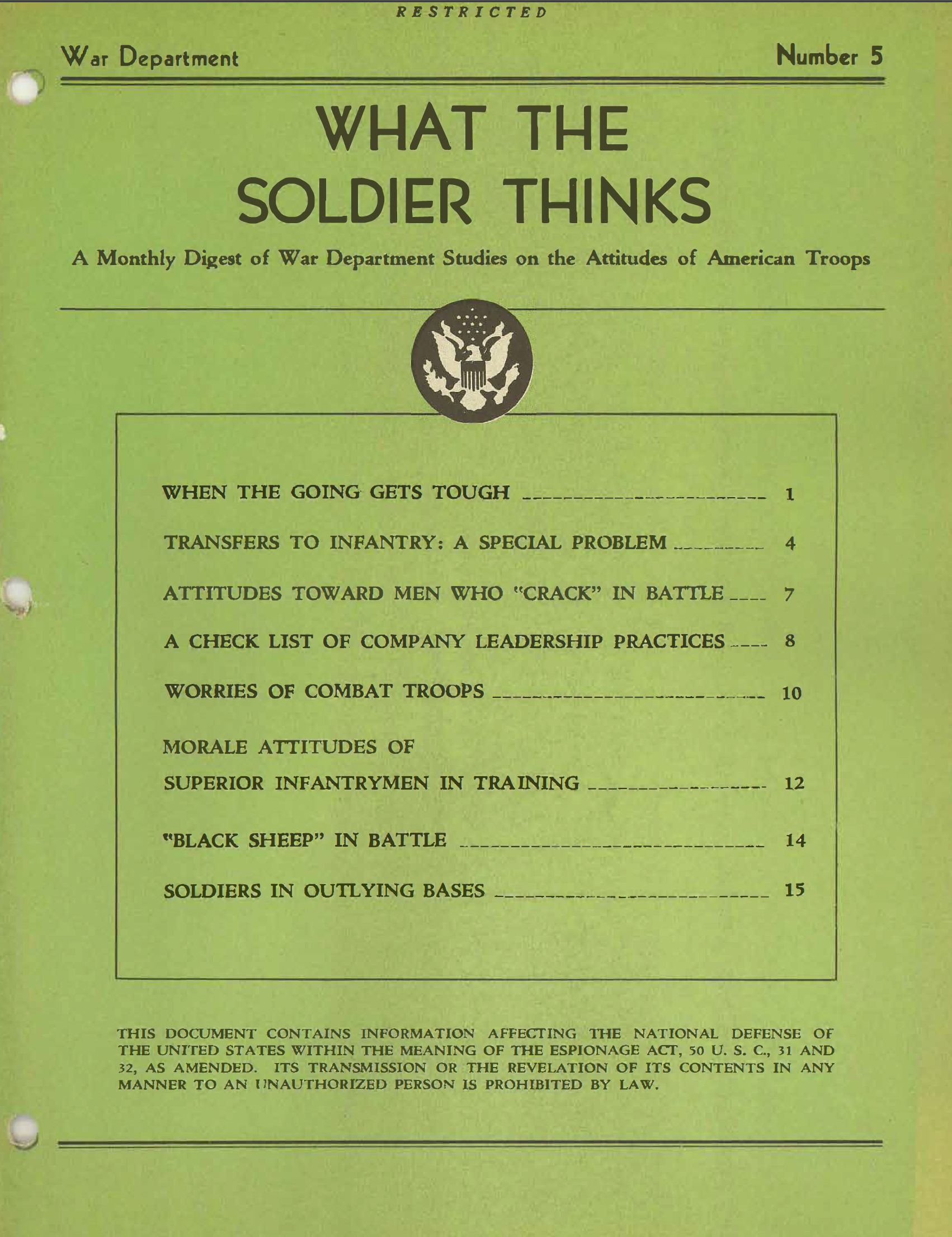 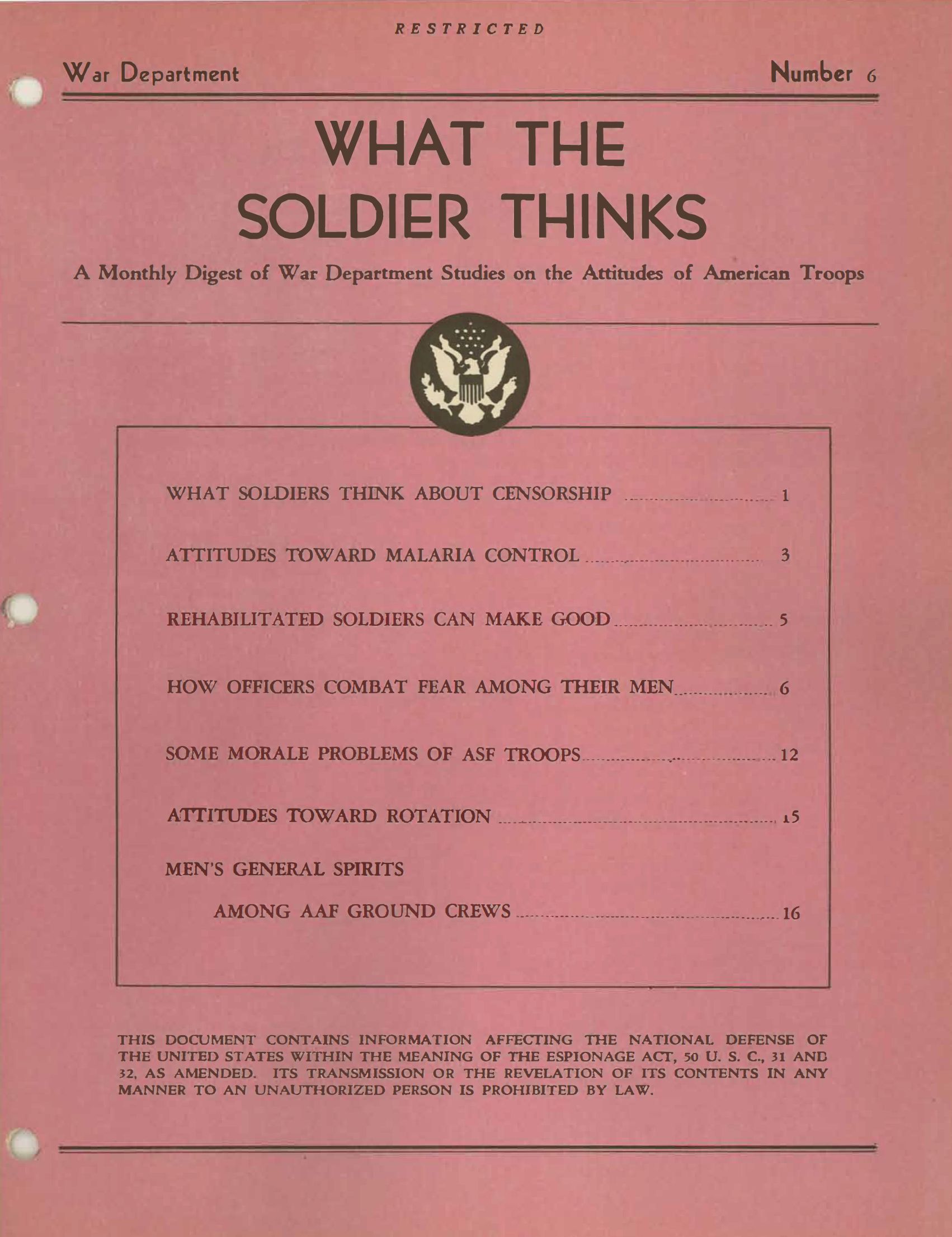 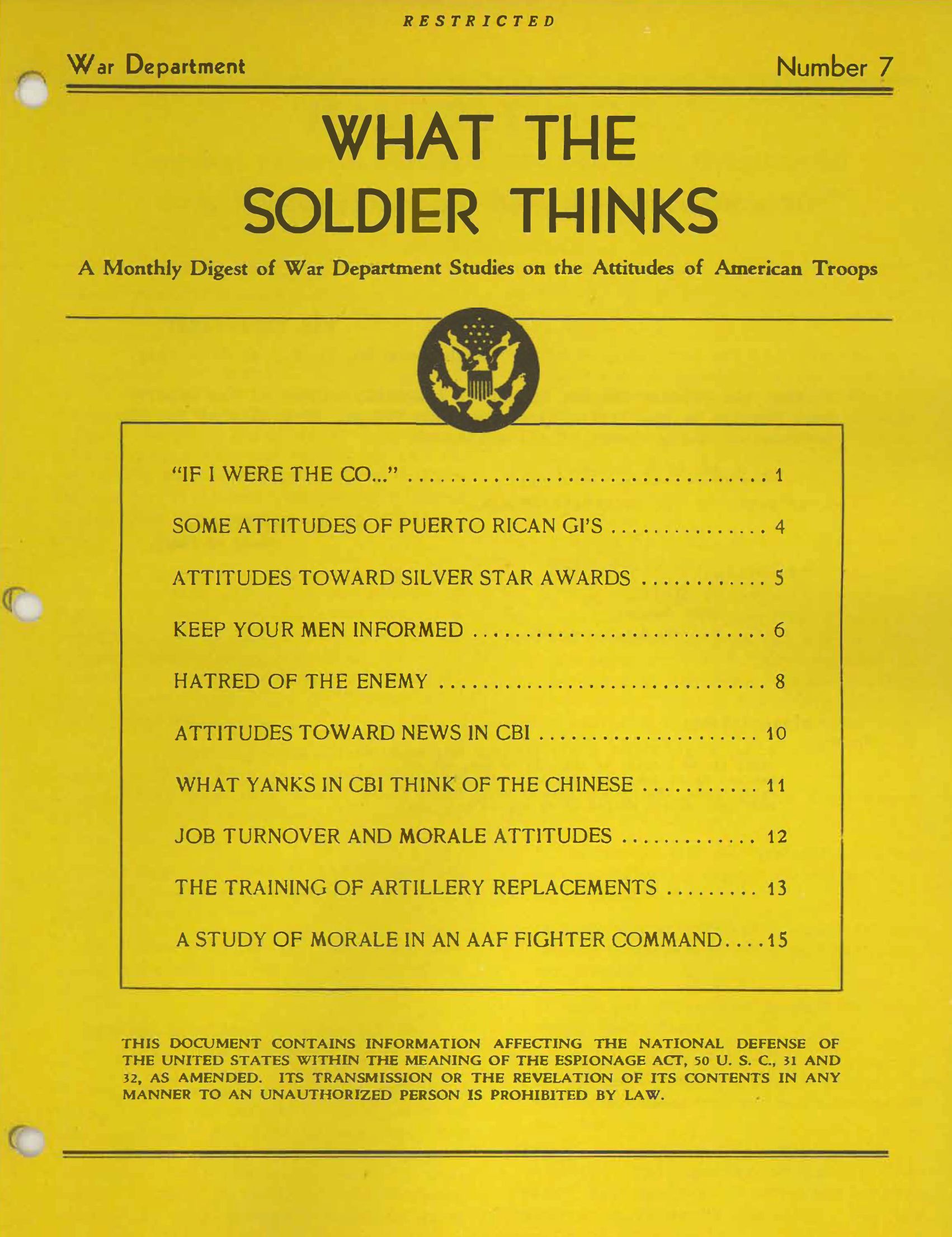 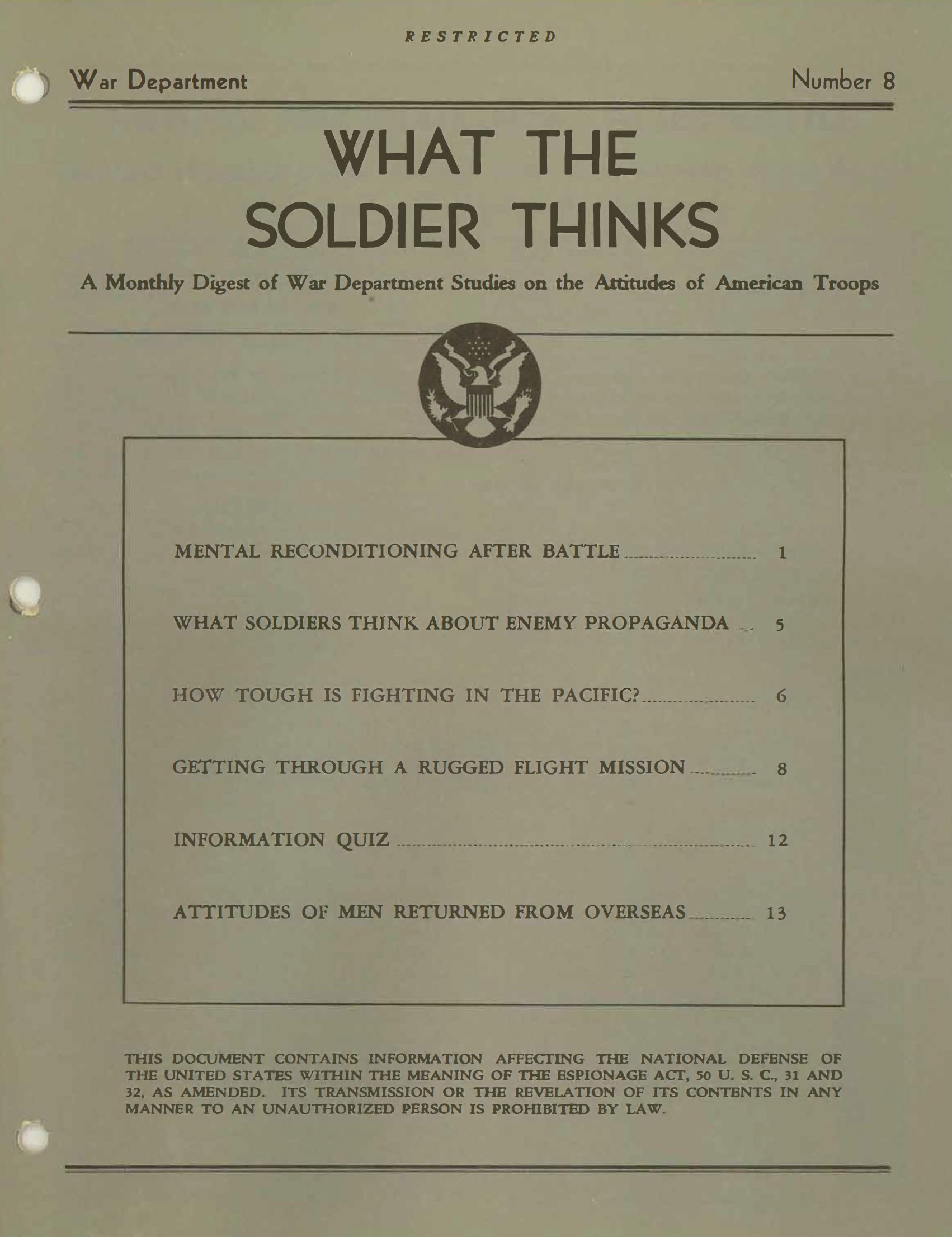 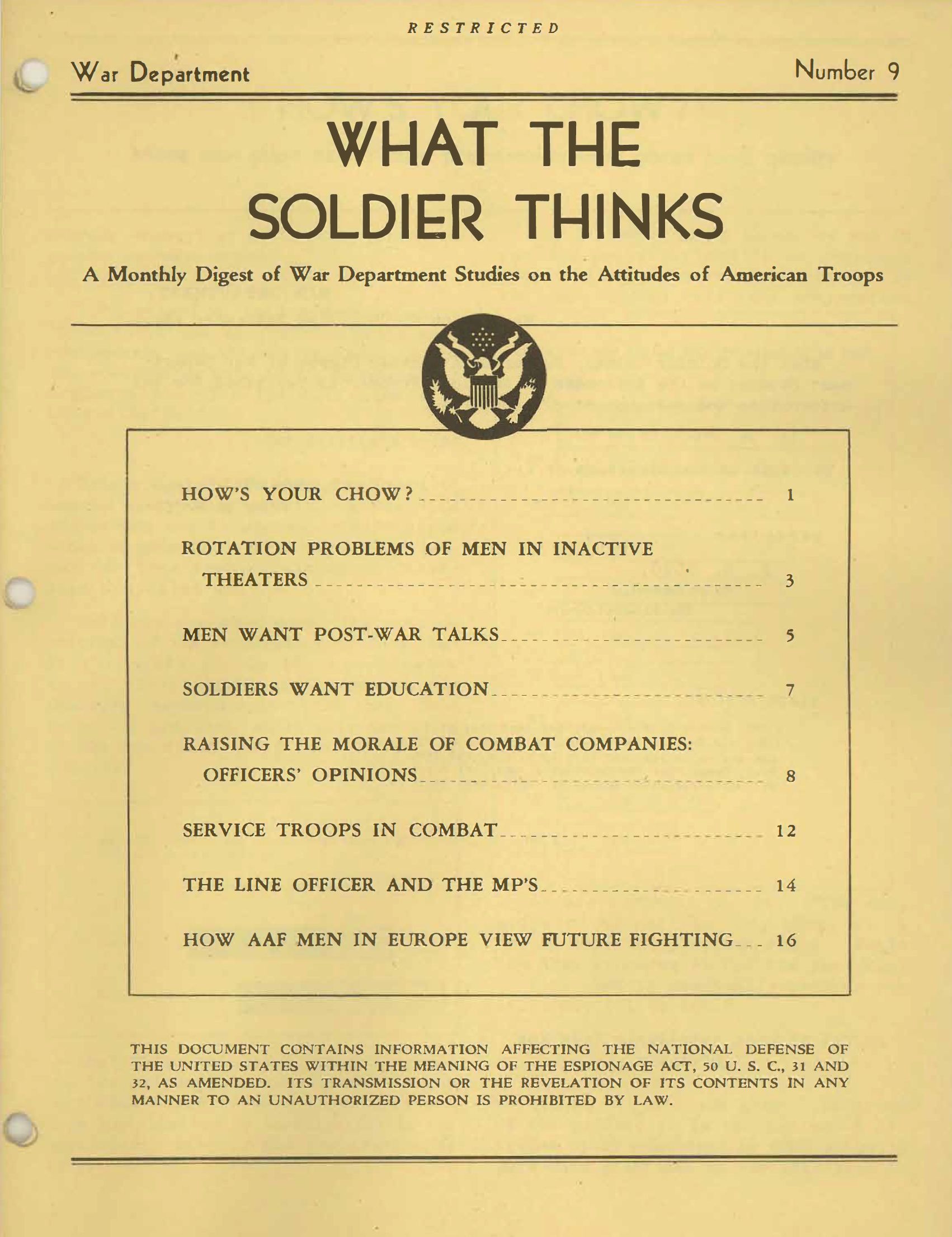 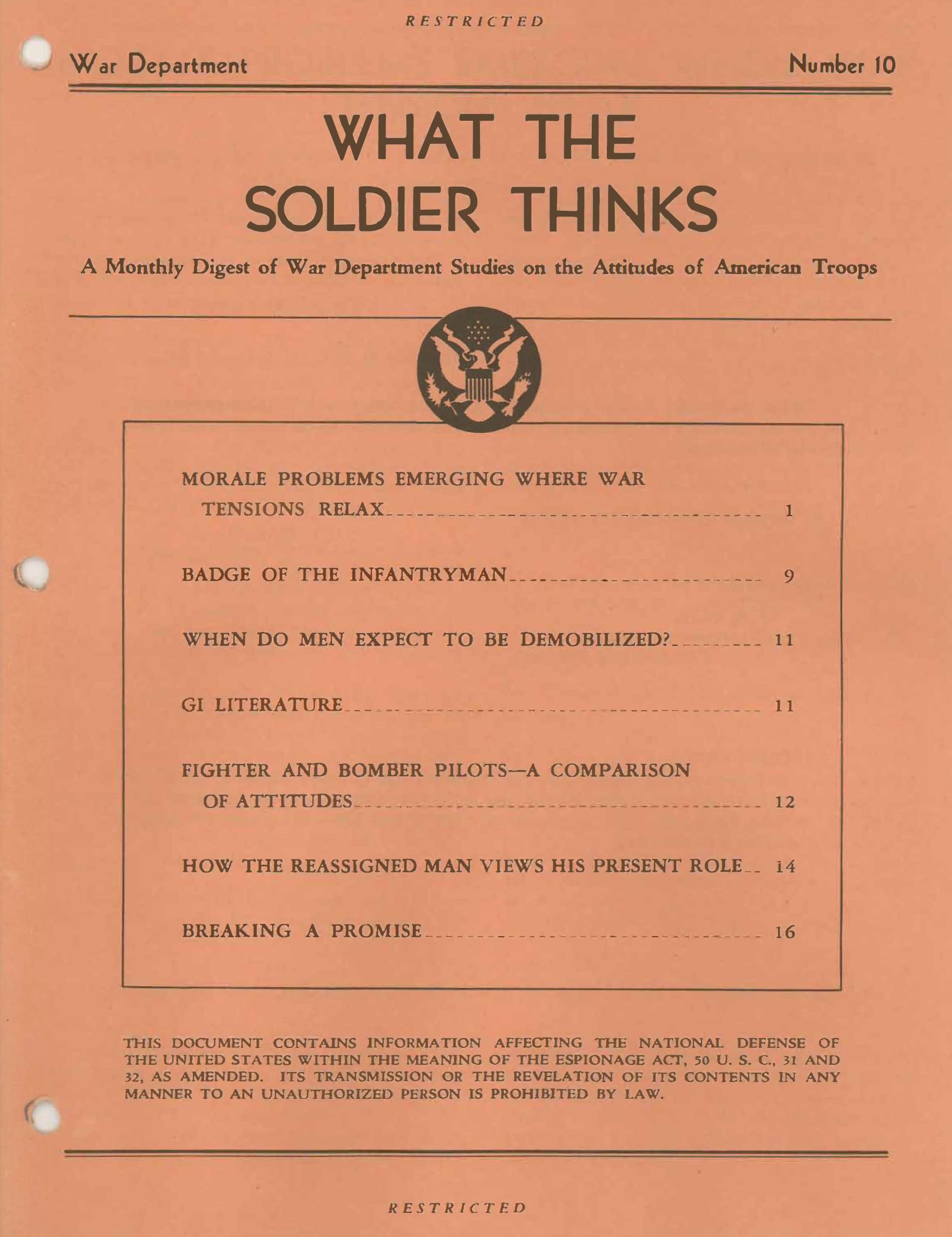 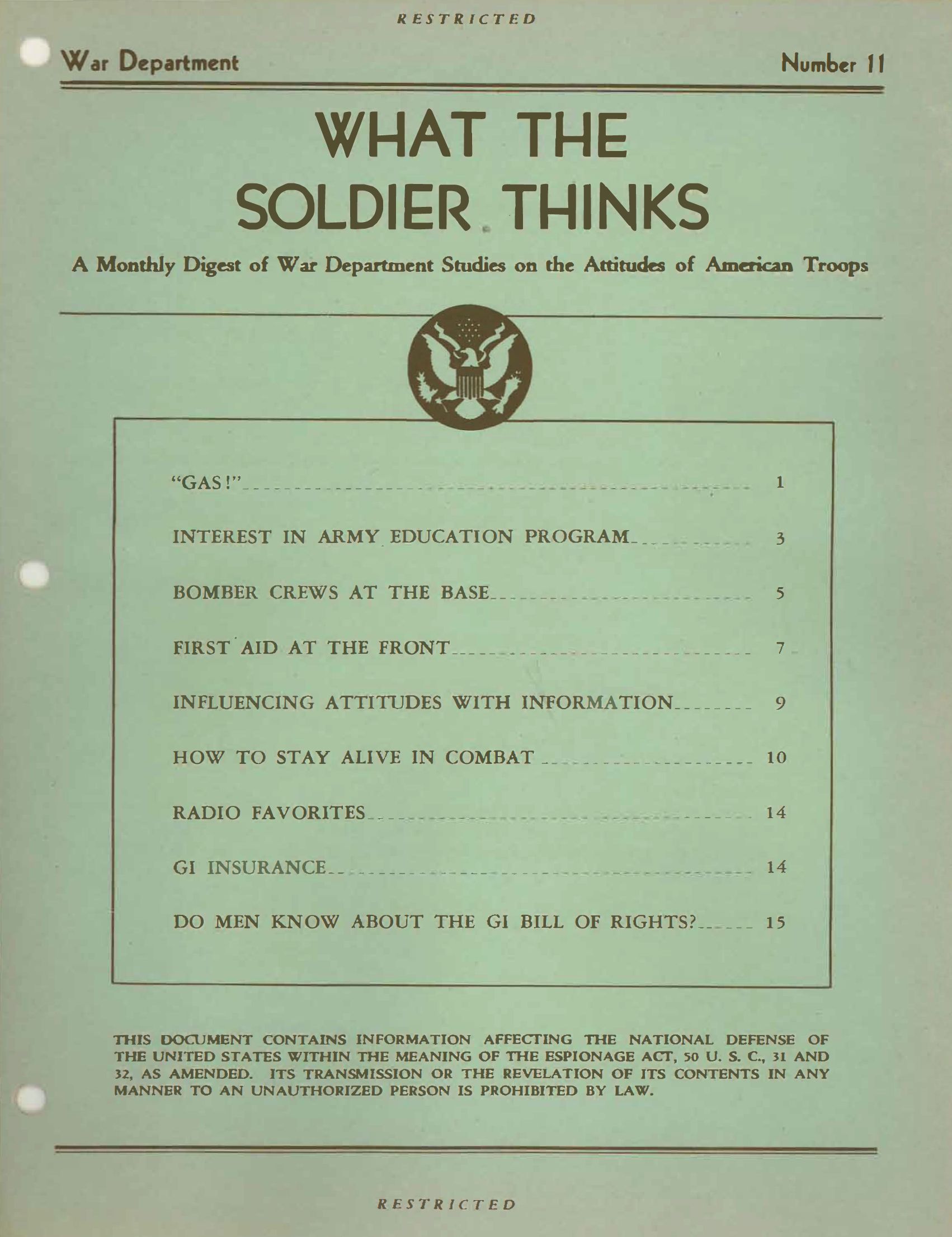 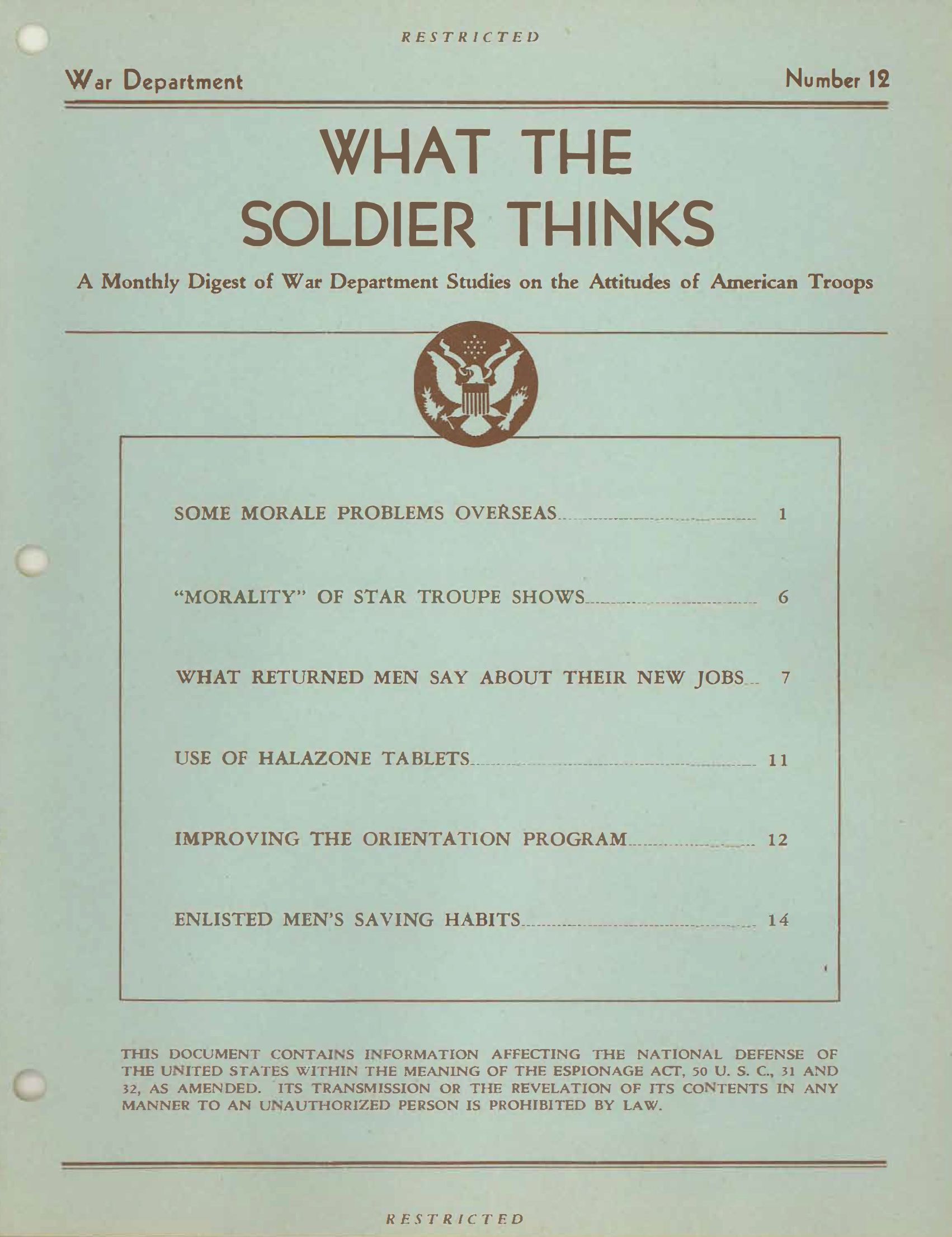 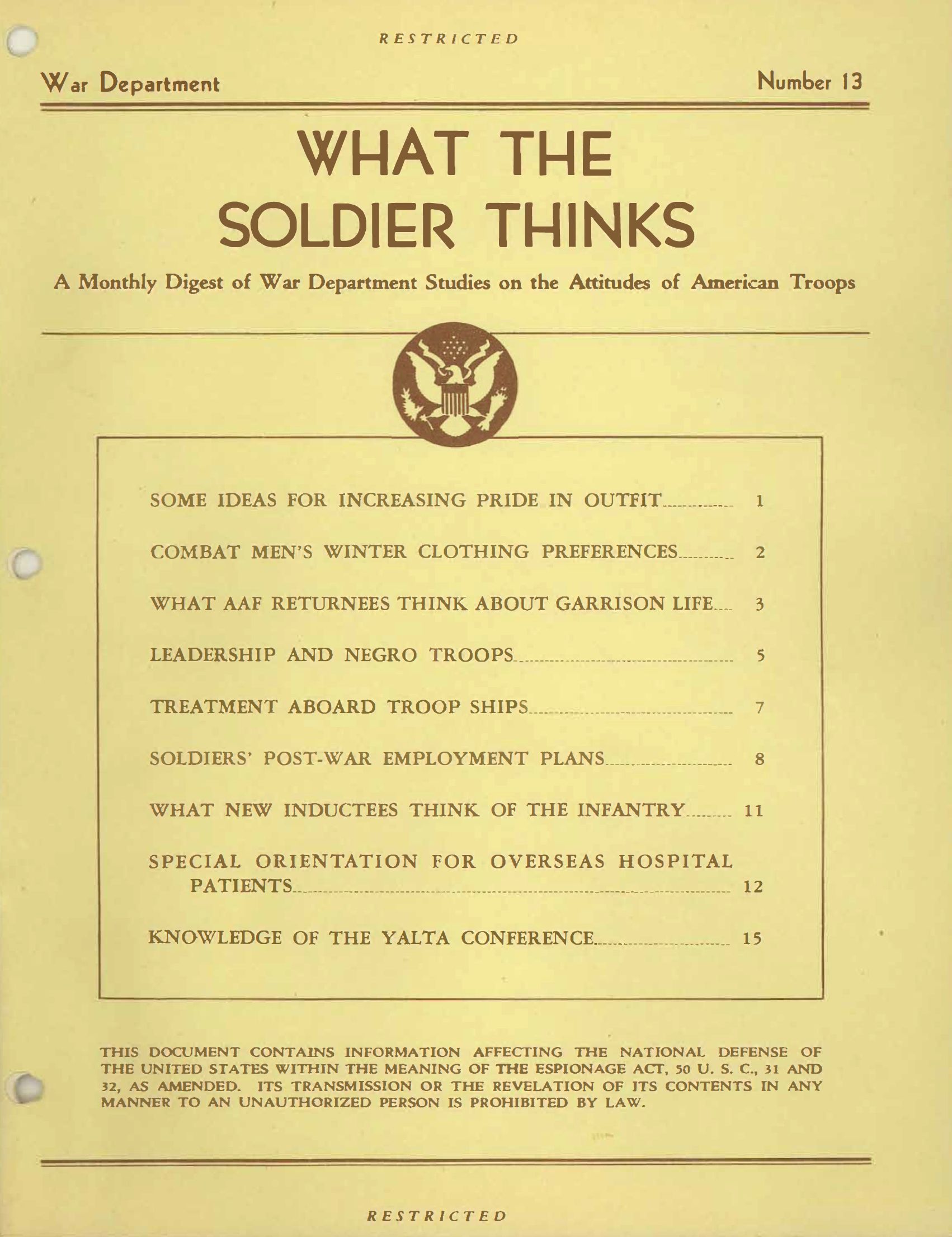 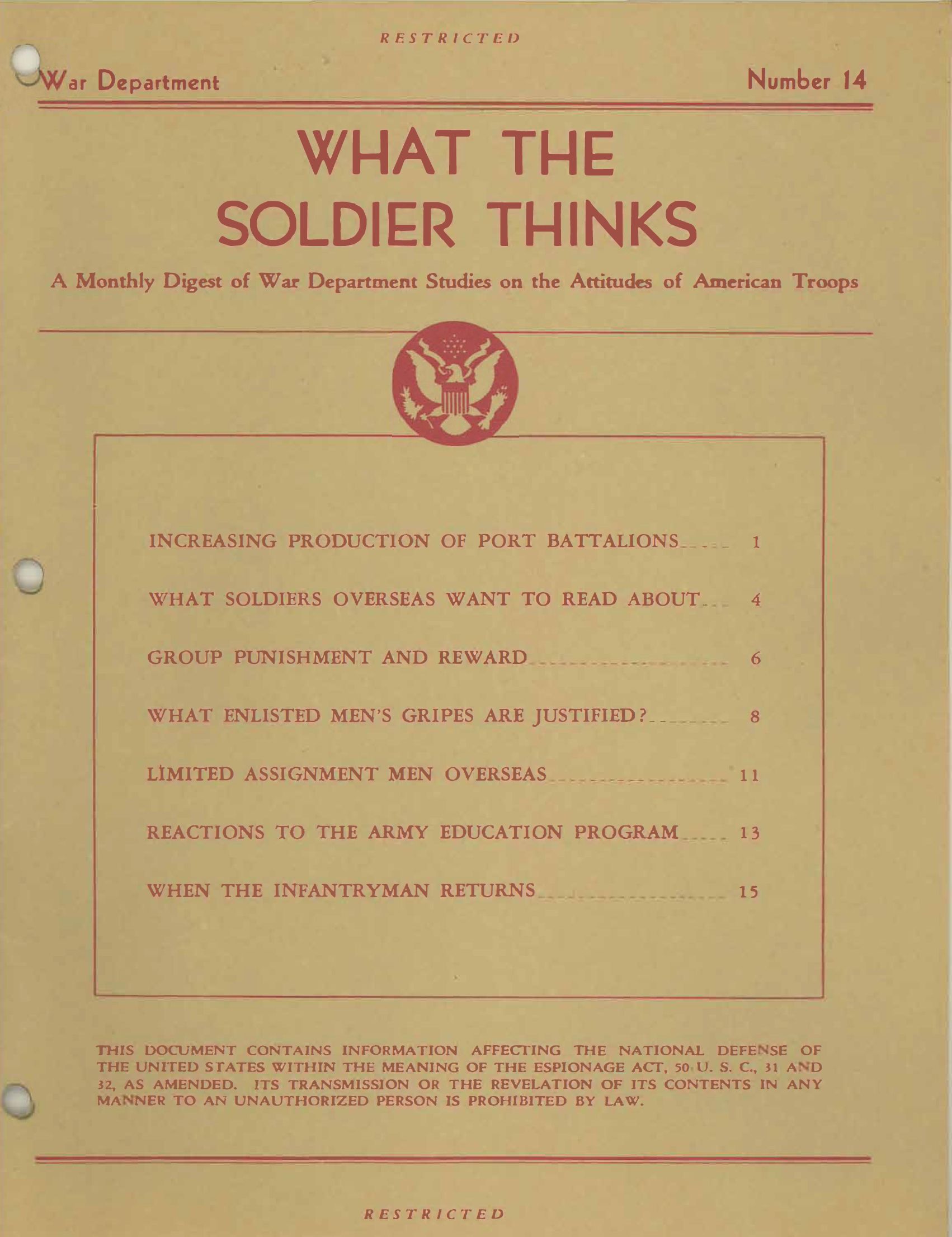 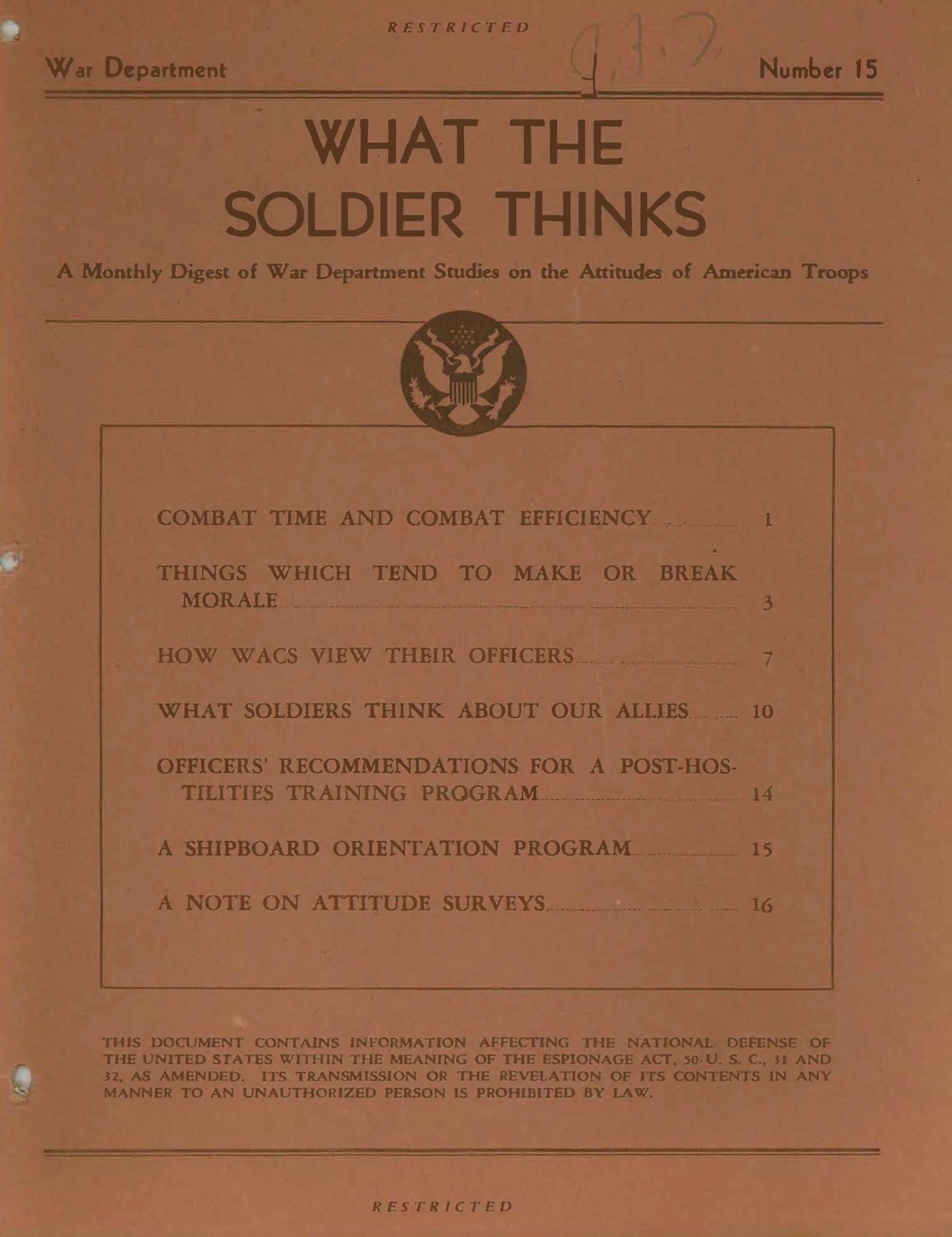 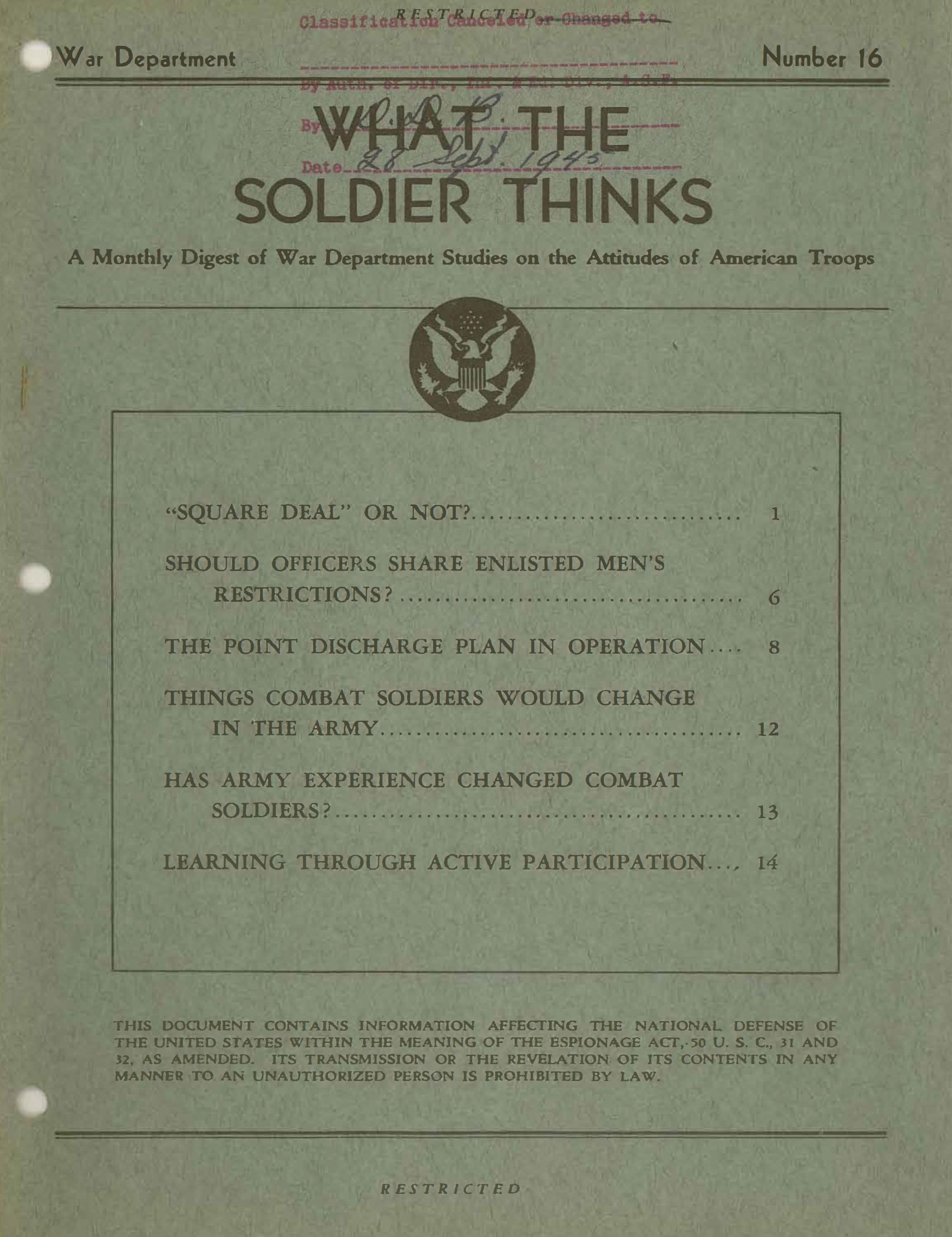 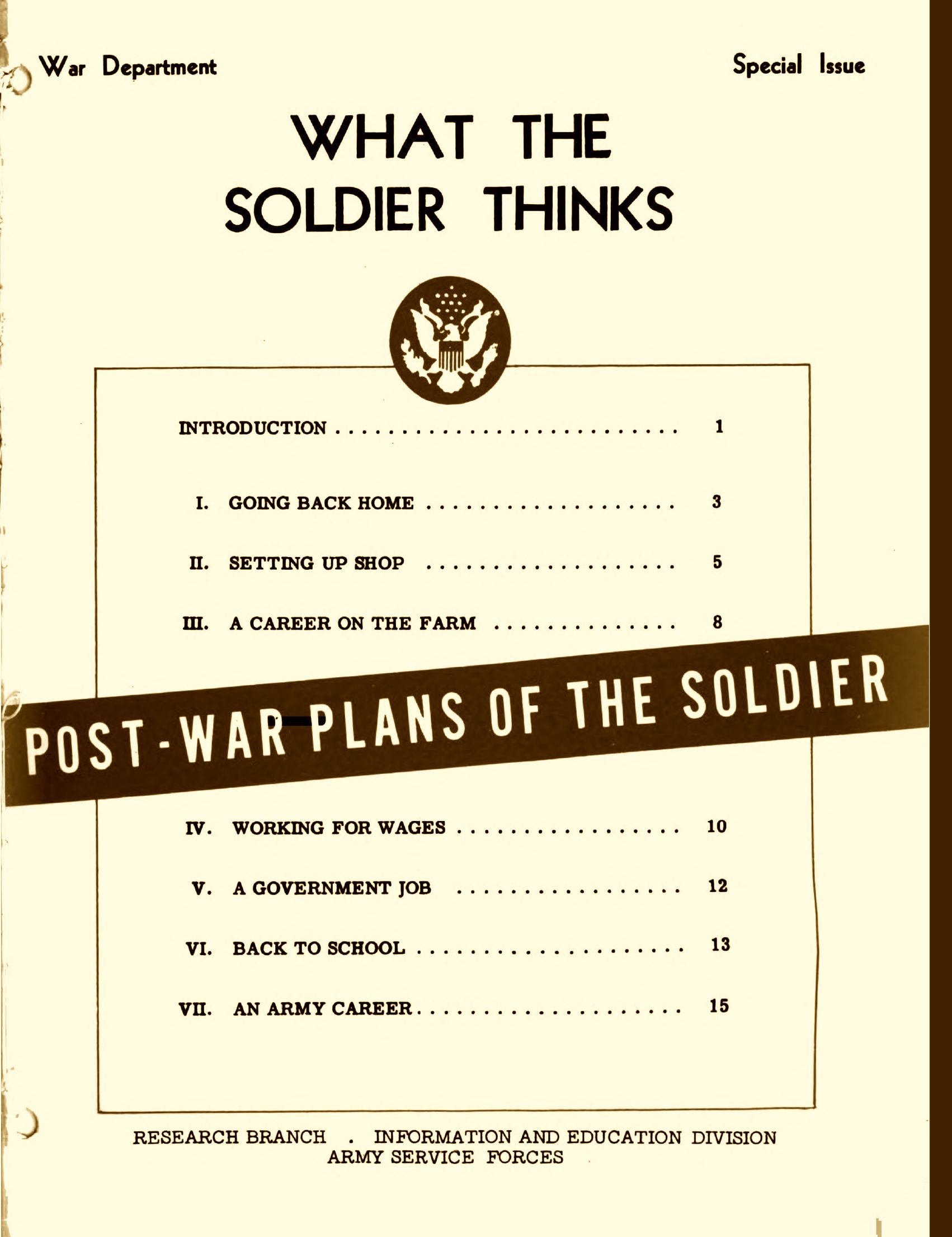 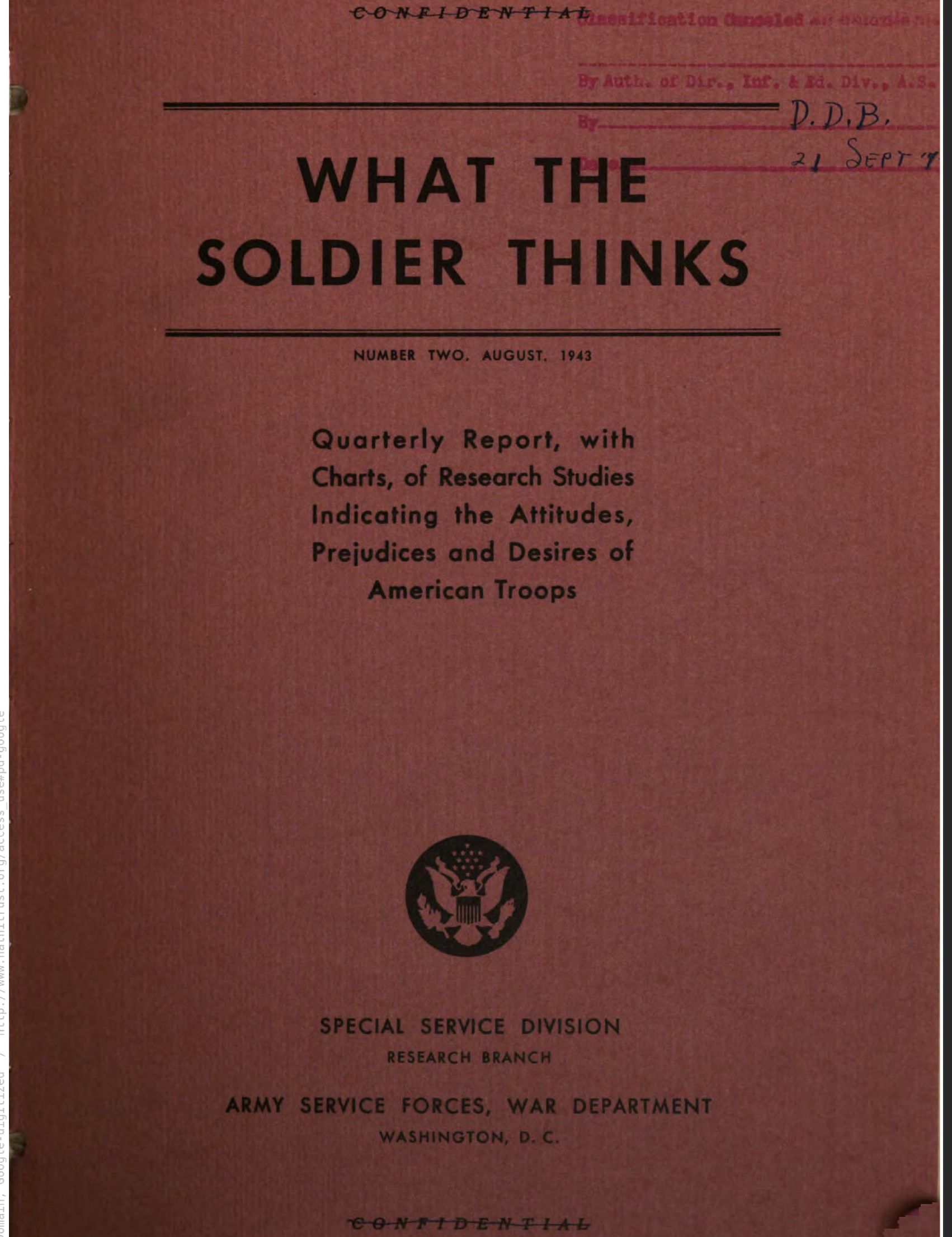